Get the Breakdown on Gout Management

Get the Breakdown on Gout Management

Announcer:
You’re listening to Conference Coverage on ReachMD, captured on location at the Congress of Clinical Rheumatology’s Annual Meeting in Destin, Florida. Your host is Dr. Madelaine Feldman, Clinical Associate Professor of Medicine at Tulane University Medical School and Vice President of the Coalition of State Rheumatology Organizations.

Dr. Feldman:
Dr. Madelaine Feldman here at the Congress of Clinical Rheumatology, and I just attended Hyon Choi’s lecture on Evidence-Based Guidelines for Optimal Gout Management. He is Professor of Medicine and Director of Gout and Crystal Arthropathy at Harvard Medical School.

There were several important items that Dr. Choi brought up. In general, in terms of gout, the prevalence of gout was noted to be anywhere from 6 to over 10% of the male population in the United States, but that was back in the early ‘90s, and it has increased considerably. Women would be getting gout approximately 2 to 6%. Again, generally, it increased in the postmenopausal ages. An interesting fact is that hospitalizations for gout surpassed hospitalizations for rheumatoid arthritis in 2004. Dr. Choi spoke extensively about allopurinol hypersensitivity syndrome. It is probably the most concerning adverse event with uric acid-lowering treatment. This particular syndrome manifests as a Stevens-Johnson syndrome or TEN, toxic epidermal necrolysis.

In the United States, the hospitalization and prevalence is 1 in 1,500 patients. In the Taiwanese population, that increases to 1 in 500 patients. And there is anywhere from a 20 to 30% mortality rate with hypersensitivity syndrome secondary to allopurinol. Dr. Choi discussed how to start allopurinol in a gout patient, and he said start at 100 mg per day, decrease that dose to 50 mg per day in a chronic kidney disease patient who is stage 4 or higher; titrate the dose every 2 to 5 weeks to achieve the target serum uric acid concentration. Normally, we look at less than 6. However, in some tophaceous cases, we certainly would like it less than 5. He made a point that the dose of allopurinol can easily be raised to greater than 300 even in patients with renal impairment.

In those cases where there is a suspicion that there may be an increased risk of allopurinol hypersensitivity syndrome, he did state to consider ordering HLA testing. A strong risk factor for allopurinol hypersensitivity syndrome is the presence of HLA-B*5801. It is a genetic marker that can be used to predict patients who might experience severe hypersensitivity syndrome such as Stevens-Johnson syndrome or toxic epidermal necrolysis with the use of allopurinol, and the prevalence of HLA-B*5801 varies by race. The white population in the United States, it is about 0.8%, in the UK about 0.5%. However, in the Asian population, this HLA risk factor is present in 7 to 15% of Chinese, and it can go as high as 20 to 25%. However, in Japanese patients, the HLA-B*5801 is only at 0.8%, and in the United States, 0.6%. African patients, the prevalence of HLA-B*5801 is 7 to 10% in Africa and in the United States around 4%. And the risk of allopurinol hypersensitivity reaction is higher as the age increases, so he recommends testing this in those patients that have a higher risk factor, those with renal insufficiency, those who are of Chinese or Korean descent, African-American descent and even Native or Hawaiian Pacific Islander descent. And if the HLA-B*5801 is positive, he would not recommend utilizing allopurinol as a uric acid-lowering agent.

Announcer:
You’ve been listening to Conference Coverage on ReachMD. For more highlights from this and other meetings around the world, visit ReachMD.com. ReachMD: Be Part of the Knowledge.

With hospitalizations for gout on the rise, more attention has been focused on developing evidence-based management guidelines, and here they are. 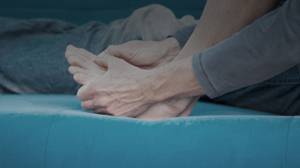 Imaging Considerations in Diagnosing GCA
UP NEXT...
Knee Resurfacing: Another Option for Early Osteoarthritis?
CME
Register