Why Is Psoriatic Arthritis Often Misdiagnosed?

Why Is Psoriatic Arthritis Often Misdiagnosed?

Announcer:
This is ReachMD. Welcome to this special series, Beyond Skin Deep: Impacts of Psoriatic Arthritis, sponsored by Lilly.

Dr. Birnholz:
From the ReachMD studios in Fort Washington, Pennsylvania, I’m Dr. Matt Birnholz, and on this episode, we connect with Dr. Alexis Ogdie, Assistant Professor of Medicine at the Hospital of the University of Pennsylvania. Dr. Ogdie reflects one memorable patient’s story of coping with psoriatic arthritis.  Here’s what she shared from her office in Philadelphia.

Dr. Ogdie:
So, I had a fairly young gentleman, who I think was in his early 30’s or mid 30’s, who’s a father of 2 children and married, and he was in great health, working hard, and then all of a sudden he was at the amusement park with his 2 children and they walked all day, and at the end of the day his feet hurt a lot, and he didn’t really understand why, but his feet were so painful.  And in the morning he woke up and he noticed that he had a couple of toes that were swollen—I think it was just 2 or 3 toes—and he had dactylitis.  He didn’t identify it as such at the time.  He had no other past medical history so no diagnosis of psoriasis.  He went to his primary care physician, and his primary care physician looked at his toes and said, “You have gout.”  And so she treated him with colchicine and I think NSAIDs as well.  So, the colchicine obviously didn’t help, and the NSAIDs did help a little bit, but he still had pain.  About 4 to 6 weeks later, he still had the swelling in his toes and was still on the NSAIDs but continued now to have new joints that popped up.  So, his thumbs swelled up like a big sausage as well, and so he couldn’t bend his thumb and it was really painful.  His toes were so painful that it was hard to walk, and then his knees swelled up, and then he could barely walk.  He had trouble getting up the stairs.  In the meantime, he had developed a rash around his genital region, and so that was obviously quite distressing to him.  It was actually bad that I think that prompted him to go back to the physician again, and she said, “Well, maybe this is still gout, but that looks like psoriasis, potentially, so maybe this is actually psoriatic arthritis.”  And it turns out that he had a scalp rash around his ears for a long time, and for many years he’d had dandruff, but he never really thought of it.  He just used the dandruff shampoos.  And so, by the time he got to me, he was about 6 to 8 weeks into his disease activity, and he just had terrible disease activity.  He couldn’t get up the stairs very well.  He couldn’t help with his kids at home.  He felt lousy.  He was fatigued all the time, wasn’t able to do everything he needed to do at work, so he was having a really hard time.  And then, on top of that, he had this genital rash that was really scary, and so he didn’t want to have sex with his wife, so that was causing this… They were both very supportive of each other, but it was really hard to have that, kind of, in the way.  So, I think all of this was really distressing and anxiety-provoking.  I think that illustrates sometimes how this comes up and how people don’t expect this.  So, it’s not like all people with psoriatic arthritis have this long history of psoriasis and they know that they’re going to develop psoriatic arthritis.  It can come out of nowhere, and it is frequently misdiagnosed, initially, especially as gout, as a common misdiagnosis, particularly in men.

Dr. Birnholz:
That was Dr. Alexis Ogdie sharing her thoughts on the coping challenges and quality of life impacts experienced by her patient with psoriatic arthritis. For ReachMD, I’m Dr. Matt Birnholz, inviting you to be part of the knowledge.

Announcer:
The preceding program was sponsored by Lilly. Content for this series is produced and controlled by ReachMD. This series is intended for healthcare professionals only. To revisit any part of this discussion and to access other episodes in this series, visit ReachMD.com/beyondskindeep. Thank you for listening to ReachMD. Be Part of the Knowledge.

Gout or psoriatic arthritis? One patient's distressing experience on the road to diagnosis may have you thinking twice about the possibility of PsA. 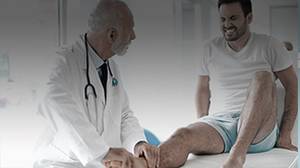