After pulling out of the Olympic women’s gymnastics team and all-around competitions, Simone Biles became the latest athlete at the center of the push to destigmatize mental health conversations in sports.

Biles withdrew from the team final citing the emotional toll of the Games, telling Hoda Kotb on the "TODAY" show that “coming to the Olympics and being head star isn't an easy feat.” She contributed to the team’s score just on the vault, where she performed a less difficult move than originally planned. The U.S. team went on to win the silver medal.

She later pulled out of the all-around competition and will "be evaluated daily to determine whether or not to participate in next week’s individual event finals,” USA Gymnastics said in a statement.

Biles — who told reporters Tuesday there’s “more to life than gymnastics" — is another in a series of athletes who have publicly prioritized their mental health firmly above their athletic pursuits, sparking a national conversation about mental health in sports.

Tennis star Naomi Osaka withdrew from the French Open after clashing with officials over her opting to skip news conferences to focus on her mental health. French tennis officials initially threatened to suspend and fine Osaka — but the four Grand Slam tournaments later released a joint statement commending her for sharing her experience.

“Perhaps we should give athletes the right to take a mental break from media scrutiny on a rare occasion without being subject to strict sanctions,” Osaka wrote earlier this month in a column for Time magazine.

Osaka, who also competed in the Tokyo Olympics, lost to the Czech Republic’s Marketa Vondrousova on Tuesday. She said the high expectations placed on her contributed to her loss.

“I definitely feel like there was a lot of pressure for this,” she said. “I think it’s maybe because I haven’t played in the Olympics before and for the first year [it] was a bit much.”

Biles told reporters her decision was inspired by Osaka. Before the team finals, Biles wrote in an Instagram post that she sometimes feels she has “the weight of the world” on her shoulders and felt pressure heading into the Olympics.

Support has poured in for both Biles and Osaka on social media, including from Rep. Cori Bush, D-Mo., who took to Twitter on Tuesday afternoon to praise the athletes for advocating for Black women’s mental health.

“Your health and peace matters,” Bush wrote. “You’re reminding Black women that we can take the space we need for ourselves.”

Sen. Mitt Romney, R-Utah, also tweeted support for Biles, writing, "I love and admire Simone Biles and our Olympians. Beyond their determination and sacrifice, they evidence the greatness of the human spirit, in victory and in defeat. I take pride in them, not so much for the medals they win as for the grace, humanity & character of their hearts."

Some high-profile athletes have made efforts in recent years to reduce the stigma against mental health discussions in sports.

Cleveland Cavaliers basketball player Kevin Love founded the Kevin Love Fund in 2018 to help people focus on prioritizing their mental well-being. Love has been open about battling anxiety and depression and going to therapy as a professional athlete, including experiencing a panic attack during a game against the Atlanta Hawks in 2017.

“It was a wake-up call, that moment,” he wrote in an essay in The Player’s Tribune. “No matter what our circumstances, we’re all carrying around things that hurt — and they can hurt us if we keep them buried inside.”

And swimming phenom Michael Phelps is not only the most decorated Olympian of all time, but also a vocal mental health advocate after revealing in 2018 that he has struggled with depression and attention deficit hyperactivity disorder, or ADHD.

Phelps said Wednesday on "TODAY" that for him, the pressure of the Games is what drove him and when the competition was over, he struggled with finding his identity.

"We’re human beings, we have emotions, we deal with things just like everybody else does," he said. "But ... literally the spotlight is on us, we’re supposed to carry all this stuff and it’s difficult."

"I think the only way that we’re able to be our 100 percent authentic self is if we’re able to take care of our mental health and our physical self at the same time," he said. And Biles "being able to do this shows what she wants to do moving forward."

Biles speaking out "is an opportunity for us, all of us, to really learn about mental health, to all help each other out," Phelps said. "We can’t brush it under the rug anymore."

He said he's happy to see so many more conversations about emotional well-being than he did five years ago. "I had no idea it would be as big — mental health — as big as it is now." 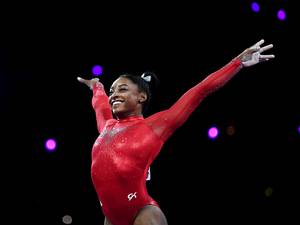