Your immune system comes ready for battle against bacteria, viruses, fungi and even cancer. But in cases of autoimmune disease, the immune system’s superpowers turn it into a supervillain. Now, Salk Institute scientists have discovered a way to stop certain immune system cells from mistakenly attacking the body. Their findings, published the week of August 26, 2019, in the journal Proceedings of the National Academy of Sciences, suggest a new way to target Th17 helper T cells, a type of immune cell that produces interleukin 17, a molecule known to be at the root of autoimmune diseases such as multiple sclerosis, rheumatoid arthritis and psoriasis. Previous efforts targeting Th17 helper T cells have had limited success.

“In an autoimmune disease situation, the immune system turns its weapons on itself,” says Associate Professor Ye Zheng, of Salk’s NOMIS Center for Immunobiology and Microbial Pathogenesis and co-senior author of the study.

“Autoimmune diseases affect around 1 in 30 people. This research opens the door to treating these patients without triggering harmful side effects,” says co-senior author and director of Salk’s Gene Expression Laboratory Ronald Evans, who holds the March of Dimes Chair in Molecular and Developmental Biology and is a Howard Hughes Medical investigator.

The team of researchers, including first author Christina Chang, used a mouse model of multiple sclerosis to investigate the overproduction of interleukin 17 in Th17 helper T cells. These immune cells normally work to cure infections, with interleukin 17 sending an inflammation signal to help kick off the immune response. However, sometimes the immune cells become hyperactive and start churning out too much interleukin 17, damaging nearby tissues and kicking off the autoimmune disease process.

The team uncovered a way to use a molecule called REV-ERB to suppress interleukin 17 production. REV-ERB binds to a site on the Th17 helper T cells that is normally occupied by a molecule called ROR, responsible for interleukin 17 production. By taking over the same binding location, REV-ERB competes with ROR. “ROR is a gas pedal that drives these helper T cells, but REV-ERB is like the brakes,” says Zheng.

The researchers then showed they were able to chemically activate REV-ERB and delay the onset and slow the progression of symptoms of experimental autoimmune encephalomyelitis, the mouse model of multiple sclerosis.

More work is needed, but the scientists say targeting this particular pathway offers a way to tamp down interleukin 17 expression without affecting the rest of the immune system.

Going forward, the scientists plan to study the role of REV-ERB in models of rheumatoid arthritis and psoriasis. 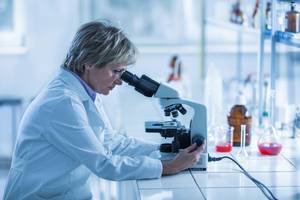 A Step-by-Step Guide to Diagnosing SLE in the Primary Care Setting
UP NEXT...
Prednisone and Lupus – A Treatment Mainstay?
CME
Register