Black and Hispanic pregnant women in Philadelphia are five times as likely as white and Asian women to have been exposed to the novel coronavirus, according to a new study led by Scott Hensley, Ph.D., an associate professor of Microbiology in the Perelman School of Medicine at the University of Pennsylvania, and Karen Marie Puopolo, MD, Ph.D., an associate professor of Pediatrics and neonatologist at the Children’s Hospital of Philadelphia. The study was published today in Science Immunology.

“Pregnant women are fairly representative of community exposure, and these data provide more evidence, on top of what we already know with COVID-19, that health and socio-economic equity are inextricably linked,” Hensley said, “Hopefully, this will help lead to policies that address these inequities.”

The research team measured levels of SARS-CoV-2 antibodies to estimate rates of exposure to the novel coronavirus in pregnant women cared for at two Philadelphia hospitals. They found that, overall, 6.2 percent of these women possessed antibodies to the virus, but with significant variation across racial and ethnic groups — 9.7 percent in Black women, 10.4 percent in Hispanic/Latina women, 2.0 percent in White/Non-Hispanic women, and 0.9 percent in Asian women.

Researchers said these data can inform clinical practice and care for pregnant women during the coronavirus pandemic, and be used to better understand the prevalence of the virus in the community, and how socio-economic factors and inequities may affect its spread.

“Identifying the disparity in virus exposure will ideally help lead to the discovery of what is causing these differences, including factors rooted in systemic racism, and inform public health measures aimed at preventing further infections,” Puopolo said.

As of June 2020 - the time period encompassed in this study - there were 23,160 confirmed cases of COVID-19 in the city of Philadelphia, which has a population size of nearly 1.6 million people. This suggests an infection rate of approximately 1.4 percent, which is more than 4 times lower than the estimates based on the research team’s serological data.

Researchers analyzed 1,293 women who gave birth between April and June at Pennsylvania Hospital and the Hospital of the University of Pennsylvania, which combined represent 50 percent of live births during that time in Philadelphia. The research team’s serological test utilized a SARS-CoV-2 spike protein receptor-binding domain antigen and a modified ELISA protocol. Researchers used samples stored at the Penn Medicine Biobank collected from 834 people prior to the pandemic and 31 people who recovered from known Covid-19 infections to test the efficacy of their antibody test. The researchers also tested samples from 140 pregnant women collected before the pandemic. Based on these data, the overall false-positive rate is ~1.0 percent in the serological assay used for this study.

The researchers caution that the clinical meaning of the detected antibody remains unknown.Additionally, estimates of virus prevalence need to be interpreted carefully until studies directly comparing pregnant women and the general population are completed.

This work was supported by institutional funds from the University of Pennsylvania (AI082630) and National Institutes of Health grants (UL1TR001878). The study was also generously supported by Jeffrey Lurie, owner of the Philadelphia Eagles, and Philadelphia 76ers star player Joel Embiid, and co-managing partners Josh Harris and David Blitzer. E.J.W. is supported by the Parker Institute for Cancer Immunotherapy, which supports the cancer immunology program at Penn. 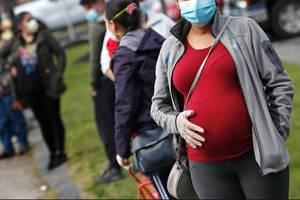 Precision Medicine in RA: A New Test for Predicting Anti-TNF Therapies
UP NEXT...
Could a Daily Dose of Baking Soda Combat Autoimmune Disease?
CME
Register