However, most secondary endpoints did not show significant benefit, and joint involvement was not the trial's original primary outcome, they reported in noting these issues in the New England Journal of Medicine.

The investigators were suitably cautious about the drug's potential. "Larger and longer trials are necessary to determine the effect and safety of litifilimab in patients with SLE," Furie and colleagues wrote. They noted that these are already underway, as developer Biogen is now conducting two phase III trials with a wider range of endpoints.

In an accompanying editorial, Daniel J. Wallace, MD, of Cedars-Sinai Medical Center in Los Angeles, was actually more enthusiastic about litifilimab, calling the results "provocative for phase II trials" and highlighted the importance of its novel target.

Wallace also saw the effort as overdue: "Lupus has lagged behind its rheumatic disease cousins, such as vasculitis and rheumatoid arthritis, in drug development." He noted that BDCA2 isn't the only new target to attract pharma interest, citing other projects targeting complement, cell-surface receptors, so-called tolerogens, and varied immune cell species.

As initially designed, the LILAC trial was intended to examine litifilimab's effects on cutaneous lupus manifestations via Cutaneous Lupus Erythematosus Disease Area and Severity Index–Activity (CLASI-A) scores. But after 22 patients had been enrolled and started treatment (though before results were unblinded), the investigators decided instead that, because of "slow recruitment" and an increased desire to evaluate arthritis as well, the primary outcome was changed to the number of active (swollen/tender) joints; skin manifestations became a secondary endpoint. Eligibility criteria were also changed to require that patients have at least four swollen and four tender joints. Another 110 patients were enrolled under this scheme. Results were reported for 120 SLE patients who received their assigned treatment.

The protocol changes also included altered dosing regimens. Patients treated under the original version received a variety of subcutaneous litifilimab doses, ranging from 50 to 450 mg. Later recruits in the active-drug arm all received 450 mg, but with fewer doses (five in all, versus seven in the original protocol).

Litifilimab was associated with a trend toward greater decrease in skin manifestations, with 64% of patients seeing at least 50% declines from baseline in CLASI-A scores, compared with 42% of the placebo group. However, the least squares mean difference versus placebo was put at 20.0 points with a 95% confidence interval that spanned 0 (-1.3 to 41.3).

Results were similar for mean changes in CLASI-A scores, all trending in litifilimab's favor but missing statistical significance.

Statistically significant advantages for the drug were seen for overall lupus severity as evaluated with the SLE Disease Activity Index-2K. Some 56% of litifilimab patients had declines of 4 or more points on this measure, versus 29% of the placebo group, and the mean absolute declines were 4.4 and 2.6 points, respectively. No differences were observed, though, in rates of lupus progression during the 24-week study or in Physician's Global Assessment scores.

In general, litifilimab was well tolerated, but one noteworthy safety finding was that three patients receiving litifilimab suffered herpes zoster or keratitis attacks (versus two in the placebo group). Wallace said this mainly highlights the need for all lupus patients to receive shingles vaccines before starting immunomodulator therapy. 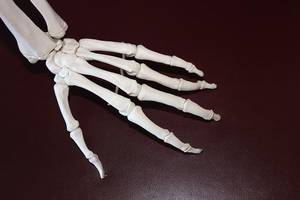 Get the Breakdown on Gout Management
UP NEXT...
IBD-Associated Arthritis: A Guide for Gastroenterologists & Rheumatologists
CME
Register