How can government slow the spread of COVID-19 in the U.S.? Look to America’s unique epidemic engines: jails and prisons in America.

Extremely high rates of incarceration in the U.S. undercut national public health and safety. The overcrowded, tight quarters in jails fuel constant risks of outbreaks. Add to that the daily movement of 420,000 guards in and out of the facilities and 30,000 newly released people who are likely to inadvertently carry the virus back to communities.

A new study from Northwestern Medicine, Toulouse School of Economics, and the French National Centre for Scientific Research found the best way to address this public safety threat is through decarceration (i.e., reducing the number of people detained in jails).

“If we can immediately stop jailing people for minor alleged offenses and begin building a national decarceration program to end mass incarceration, these changes will protect us from COVID-19 now and will also benefit long-term U.S. public health and pandemic preparedness,” said first author Dr. Eric Reinhart, an anthropologist of public health and resident physician in the department of psychiatry and behavioral sciences at Northwestern University Feinberg School of Medicine.

The study evaluated the association of jail decarceration and government anti-contagion policies with reductions in the spread of SARS-CoV-2 in the U.S. It was published Sept. 2 in the journal JAMA Network Open.

It is the first study to link mass incarceration systems to pandemic vulnerability and international biosecurity (i.e., systems for protecting against disease or harmful biological agents). In a pandemic, amplification of COVID-19 spread by one country spills over into other nations such that mass incarceration in the U.S. is a threat not only to Americans but also to global public health at large.

Although many prior studies have documented that high incarceration rates are associated with harm to communitywide health, this study of 1,605 U.S. counties is the first to show that decarceration is associated with community-wide public health benefits.

The U.S. incarcerates people at seven times the average rate among peer nations such as France, Canada, Germany, England, etc., and holds almost 25% of the world’s incarcerated population. Due to crowded conditions with poor healthcare, U.S. jails and prisons have effectively become infectious disease incubators in which at least 661,000 cases of COVID-19 have been documented since the pandemic began.

Reinhart said this is due in large part to the 55% weekly turnover rate in U.S. jail populations, which means crowds of people—totaling approximately 650,000 each day, 75% of whom are awaiting trial and 25% of whom are serving short sentences for minor offenses—are being detained in cramped spaces, and then most are released back to their communities shortly thereafter. While detained, their chances of contracting SARS-Cov-2 increase dramatically, and when they return home, many unknowingly carry the virus back to their friends, family, and neighbors.

“The majority of these people should never have been taken to jail in the first place,” Reinhart said. “There is no plausible public safety justification for their detention in a large proportion of cases, and a significant percentage of those jailed will never be convicted of the alleged crimes for which they were detained. Furthermore, no one—regardless of whether they have in fact committed a crime—should be subjected to the high risk of coronavirus infection imposed by the poor conditions in these facilities.

“The high rate at which people are cycled between communities and unnecessary short-term stays in jails is creating epidemiologic pumps that drive more and more infections in both jails and communities. This jail churn effectively produces epidemic machines that seed outbreaks both in and beyond jails, undermining public safety for the entire country.”

The COVID-19 pandemic resulted in large-scale releases of inmates, with many jails decarcerating at rates between 20-50%, Reinhart said.

“We used this exceptional historical episode during the pandemic to ask, ‘What were the consequences of this large-scale jail decarceration?’ It provided an opportunity for a natural experiment,” Reinhart said. “Pandemic-era decarceration wasn’t associated just with benefits for people who were released but also for everyone in the community. No study has ever been able to show this before, largely because we haven’t previously seen a real-world scenario with such sudden large-scale decarceration along with a well-documented means—like Covid-19 cases—to trace its implications for communities.”

The 1,605-county analysis from Reinhart and his co-author Daniel Chen of the Toulouse School of Economics and The World Bank encompassed 72% of the total U.S. population to provide one of the most fine-grained large analyses of anticontagion policies to date (jail decarceration along with 10 policies), including mask mandates, school closures, stay-at-home orders and more.

Reinhart and Chen estimated that an 80% reduction in U.S. jail populations—a level of decarceration achievable simply by pursuing alternatives to jail detention for those detained for non-violent alleged offenses—would have been associated with 2% reduction in daily COVID-19 case growth rates. This effect size was eight times larger in counties with above-median population density, including large urban areas, and was considerably larger when Reinhart and Chen considered not just changes in jail populations but also estimated jail turnover.

“Although this may sound like a small number,” Reinhart said, “because daily growth routes compound over time, even just a 2% reduction in daily case growth rates in the U.S. from the beginning of the pandemic until now would translate to the prevention of millions of cases. And, if on top of that, you factor in prison-related spread and the contribution of over 400,000 jail and prison guards to COVID-19 cases in their home communities—something we didn’t have access to data to track—then the contribution of the U.S. carceral system to overall COVID-19 cases in the U.S. has clearly been enormous,” he said.

As COVID-19 cases are again increasing around the world in connection with the delta variant, Reinhart believes this study’s findings “contain useful evidence for informing maximally effective policymaking to protect the public,” he said.

Reinhart and Chen’s recent related study in Proceedings of the National Academy of Sciences focused on the ways in which what they call “carceral-community epidemiology”—how health in jails and prisons is always interconnected with health in broader communities—particularly affects U.S. communities of color. Black and Latinx neighborhoods endure the highest rates of policing and incarceration, so when jails amplify disease in communities, this especially affects these racialized groups, Reinhart said.

“Our prior research showed that this jail-community spread of coronavirus likely accounts for a substantial proportion of the racial disparities we have seen in COVID-19 cases across the U.S.,” Reinhart said. “Ultimately, this also harms all U.S. residents regardless of race, class or partisan affiliations, as disregarding the health of marginalized people inevitably causes harm—albeit unevenly—to everyone else in a society too.” 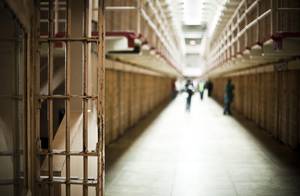